Airport magazine
download the latest issue!
HOME PAGE / Airport / News / The Polish Aviation Group will build a technical base in Rzeszów for aircrafts 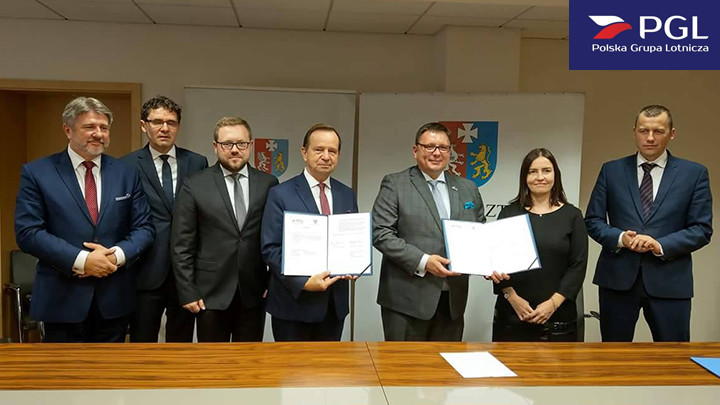 PGL announced plans of building a service center for passenger's aicrafts which will be able to service wide-body machines, such as Boeing 787 Dreamliner, Boeing 777 and Airbus A350 at the Rzeszów-Jasionka Airport. It will be the largest base of this type in Central and Eastern Europe.

The president of the Polish Aviation Group and Polish Airlines LOT Rafał Milczarski, the Marshal of the Podkarpackie Voivodeship Władysław Ortyl and the Deputy Marshal of the Podkarpacie Region, Bogdan Romaniuk, signed the letter of intent regarding this investment. The parties declared to take action to put PGL in the Rzeszów-Jasionka Airport area into a modern service center for passenger aircrafts. 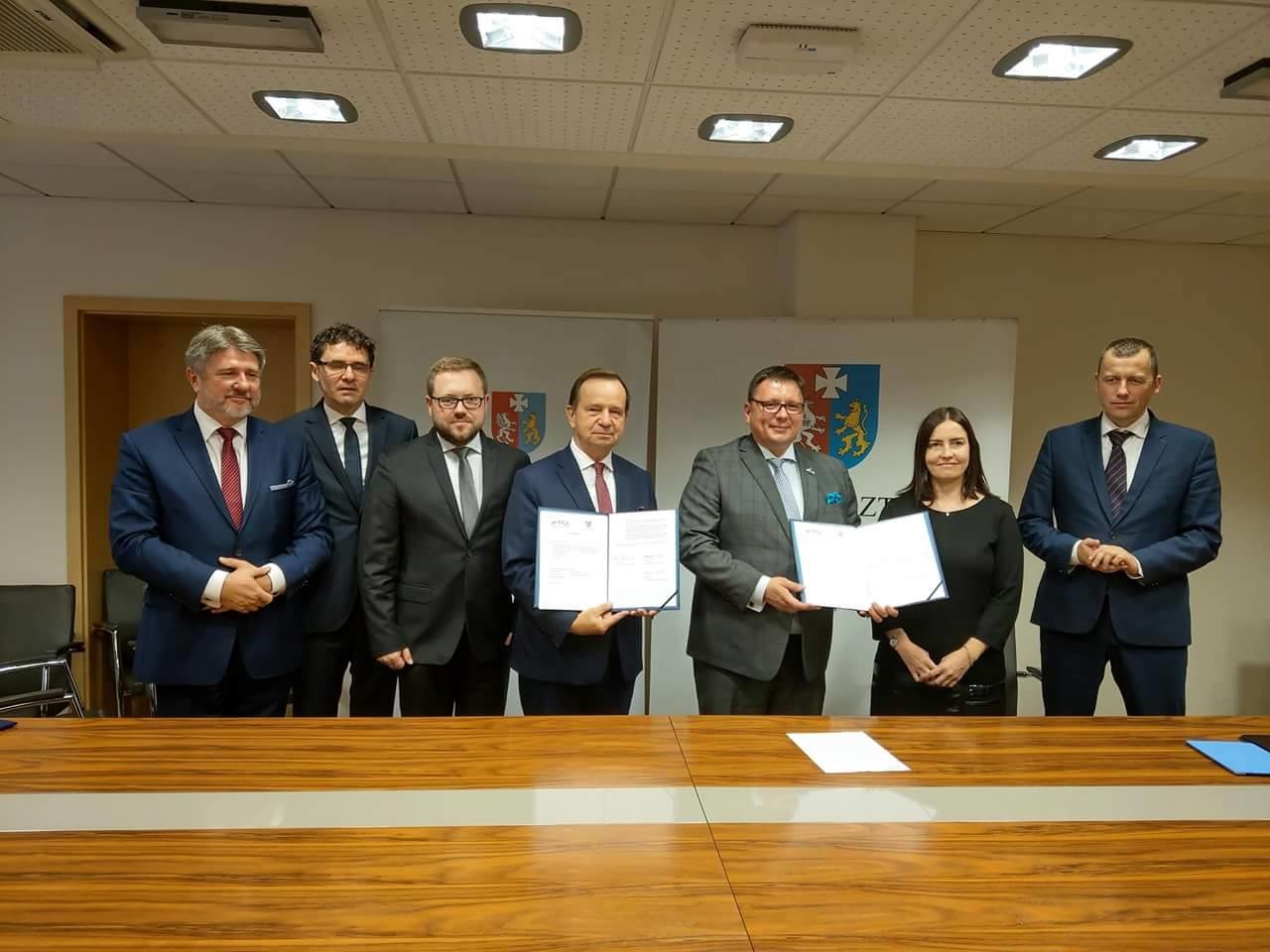 The MRO base (Maintenance Repair & Overhaul) needs to be built in Rzeszów by the Polish Aviation Group in cooperation with LOT Aircraft Maintenance Services (LOT AMS). The Rzeszów-Jasionka Airport will have technical service hangars, which will be adapted to  the most modern wide-bodied aircrafts in the world, such as Boeing 787 Dreamliner, Boeing 777 and Airbus A350.

- PGL appreciates the unique resources, competences and experience of the Podkarpackie Voivodship for the air transport. The new aircraft service center will employ a highly qualified team of engineers and flight mechanics with their background in Aviation Valley and Rzeszów University of Technology - says Rafał Milczarski, president of PGL and LOT. - Establishing of a service base for passenger's aircrafts in Podkarpacie proves that the development of companies comprising PGL and the construction of the Central Communication Port (Centralnego Portu Komunikacyjnego) means development not only in the proxility of Warsaw and Łódź, but also in other regions of Poland. The MRO base at the Rzeszów-Jasionka airport will be a positive incentive for the labor market and for the economy - he adds.

- The aviation market in Poland is developing very dynamically, the best example of this improvement is Rzeszów and the Podkarpackie Voivodeship. Jasionka has record-breaking results, both in European directions and on the way to the New York. The role of Poland in the region is constantly growing, therefore we undertake a number of investment activities, including building the Central Communication Port (Centralny Port Komunikacyjny). The latest investment of Polska Grupa Lotnicza in Rzeszów-Jasionka will play the key role in the region of Central and Eastern Europe in terms of air carriers service - says Mikołaj Wild, Deputy Minister of infrastructure.

The Rzeszów-Jasionka airport declared that it would be possible to acquire the plots necessary to carry out the investments, as well as support their communication and utilities to the extent necessary to carry it out. In turn, the Podkarpacie local government undertook to cooperate with PGL and LOT AMS in the process of training and acquiring employees needed to operate the service base, including training programs creations for secondary and higher education from in the region.

- This is an important day for the Rzeszów-Jasionka Airport, but also for the voivodship's local government. Today's letter of intent confirms the direction that we have set for the development of the airport in Jasionka, above all the prority of investments carried out at the airport. Jasionka is our communication center, I mean not only passenger's air traffic, but also cargo traffic, as well as localized companies from the aviation industry that use the airport, which is why we want to continue to develop them. The above activities result from our strategy, in the designation and implementation towards the dynamic development of our national carrier and plans to build the Central Communication Port (Centralny Port Komunikacyjny) - says the Marshal of the Podkarpackie Voivodeship Władysław Ortyl.

–    Today's declaration of the Polish Aviation Group (Polskiej Grupy Lotniczej) and the regional authorities draws a long-term development prospects of improvement, creating a chance to establish an important center in Jasionka on the European MRO market. We already have the largest hangar in Poland, but the creation of a new infrastructure dedicated to the technical service of the LOT fleet will allow us to optimally use the resources of our airport and its location - says Michał Tabisz, president of Rzeszów-Jasionka Airport.

- Air transport is recording very strong upward trends. The global fleet of passenger's aircrafts in 2017 increased by 4 percent, comparing to the previous year, which gave us 31 thousand of new aircrafts. Boeing predicts that in 2017-2034 the demand for qualified technical staff will increase to 754,000. The favorable economic situation, which predicts the huge demand for MRO services, should be used. I strongly believe that the investment in Rzeszów will not only be beneficial for PGL companies or the Podkarpackie region, but also for the entire Polish aviation sector. Due to the modern database, we will be able to increase the share of export of narrow-aero-wide-body aircraft inspection services for global airlines - says Łukasz Siwiński, AMS technical board member.
–    LOT consistently develops its activities in Podkarpacie. In April this year the carrier has launched a direct connection between Rzeszów and Newark, the second port after JFK serving New York. Thus, LOT has restored passengers from the Podkarpackie region to direct contact with one of the most important centers of the Polish American community. A month earlier, LOT inaugurated the connection between Rzeszów and Tel Aviv. The first one is served by Boeing 787 Dreamliner aircraft and the second one is operated by Boeing 737 MAX 8. Both connections increase the investment and tourist attractiveness of the Podkarpacie region.

In 2016, LOT AMS joined the Aviation Valley Association, which aims to strengthen the role of south-eastern Poland as one of the major European centers of the aviation industry. In 2018, LOT took the patronage of the class of flight attendants at the High School in Tarnobrzeg, providing, inter alia, regular training at LOT's headquarters in Warsaw.

In January this year, Prime Minister Mateusz Morawiecki appointed the Polish Aviation Group, which is a joint-stock company with capital of PLN 1.2 billion. In August, the Office of Competition and Consumer Protection approved the takeover by PGL of LOT, LOT AMS and LS Airport Services. This decision allows for the construction of the aviation group, i.e. the consolidation of State Treasury assets on the aviation market. Ultimately, under the PGL, the company leases aircrafts to carriers. Aviation companies that will enter PGL will remain organizationally separated, but they will implement a common strategy meeting the needs of the aviation market in Poland and Central and Eastern Europe. Each of them has to preserve its identity, its capital separateness and it will conduct competitive activity on the market of air services. The PGL project is one of the elements of the implementation of the Government Strategy for Responsible Development.