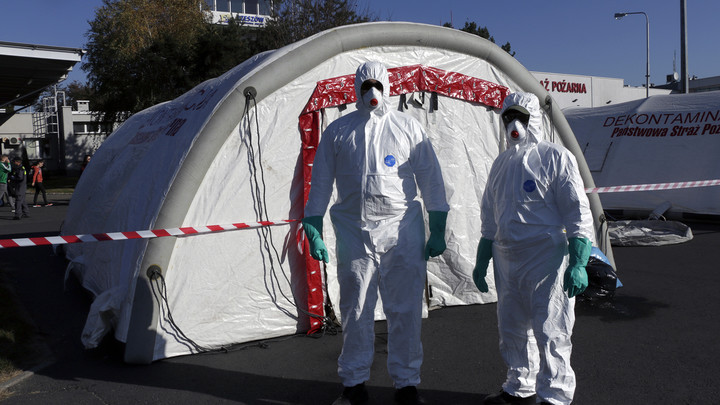 From 16th to 18th of October 2018, in Poland, there is the National Contamination Detection and Alert System training under the codename Patrol – 18.

The operation of the National Contamination Detection and Alert System (Polish name: Krajowy  System Wykrywania Skażeń i Alarmowania - KSWSiA) is a cyclical undertaking resulting from the Regulation of the Council of Ministers of January 7, 2013 on contamination detection and notification systems and the authorities' competence in these matters (Journal of Laws 2013 item. 96). During the Patrol - 18 activities will be carried out after the occurrence of a threat of chemical, biological or radioactive contamination. The main goal of the training is to improve the procedures for launching individual elements of the KSWSiA by using the scenario of events introducing crisis situations, developing evaluations and expert assessments as well as recommendations on to how to proceed, checking information exchange procedures and coordinating activities carried out by individual services and institutions.

The Armed Forces directed inter alia the personnel of the Central Pollution Analysis Center (Polish name: Centralny Ośrodek Analizy Skażeń) and the Chemical Company from The 8th Coastal Defense Flotilla to participate in the Patrol – 18. The Head of the Board of Defense Against the Weapons of Mass Destruction of the General Command of the Types of Armed Forces will perform the manager’s function.

As part the part of check, episodes of KSWSiA involving: contamination with the radioactive substance of the Berlin-Warsaw passenger train were foreseen, chemical warfare agent’s picking up by the civilian ship near the port of Dziwnów, or attempted to send a shipment containing an improvised explosive with a dangerous substance within the LS CARGO PARK complex.

Episode in the Podkarpackie voivodship

On October 16 this year at the Rzeszów - Jasionka Airport, a practical episode of reacting and conducting activities in the event of an epidemiological threat connected with the suspicion of a highly contagious disease on board of an aircraft performing a cruise to Jasionka near Rzeszów was carried out.

The episode is an element of the nationwide training of the National Contamination Detection and Alert System (KSWSiA) taken on October 15-18, 2018, code-named "Patrol-18." The main aim of the training is to improve the functioning of selected elements included in the KSWSiA during operation in conditions of contamination and contamination.

In the adopted scenario, an event consisting on the occurrence of symptoms of a highly contagious disease of a passenger on a plane during a cruising flight, initiated a series of procedures carried out by subordinate forces:

In addition, due to the fact that it is the training of the National Contamination Detection and Alert System, made to support the activities of the Border Sanitary Inspector as the leading entity in responding to epidemiological threats at the airport in the field of performing rapid diagnostic tests, the forces and resources of the Polish Armed Forces from the Military Center of Preventive Medicine in Cracow have been selected.

Vice-Governor of Podkarpacie voivodeship, Lucyna Podhalicz, together with representatives of services and entities involved in trainings during the press briefing at the place of organization of activities, summarized today's event. The main objective of the training was to improve the procedures for the cooperation of specialized forces and resources selected by the Fire Service, Ambulance and sanitary inspections. The initiation of a series of activities related to responding to such threats is related to the entire crisis management process related to the acceptance of notification, application of specialized equipment to respond to highly contagious diseases and the implementation of epidemiological procedures. In addition, the matter of organizing activities at the Rzeszów-Jasionka Airport itself was extremely important.

The photo gallery is HERE.